Morgan Lauré Garrett (born September 4, 1985) is an American stage and voice actor affiliated with Funimation/OkraTron 5000. She won the Behind the Voice Actors‘ Breakthrough Voice Actor of the Year Award in 2012. Her major roles include Seraphim in the Is This a Zombie? series, and Tina in the Toriko series. 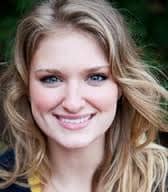 World Break: Aria of Curse for a Holy Swordsman (2015)

A Certain Magical Index: The Miracle of Endymion (2015)

Wanna be the Strongest in the World