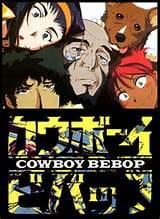 Unfortunately, Hajime Yatate is somewhat of an enigma.  I could not find a photograph of him anywhere.  If you know where I can find on, please e-mail me at admin@english-dubbed.com.  Also, biographical information is also difficult to find.  I do know this, his best known works are Cowboy Bebop, Witch hunter Robin, The Big O, Tiger & Bunny and Outlaw Star.  He also created several Mobile Suit Gundam Series’s.

Sunrise is one of the biggest anime makers in all of Japan. If you are thinking “Real Robot“, you probably mean Sunrise’s production. Between decades-spanning Gundam franchise and one-shot gems like The Vision of Escaflowne and Code Geass, Sunrise has long since cemented its reputation of one of theHumongous Mecha market trend makers. Also, being a subsidiary of Bandai Entertainment (since 1994), many of its works (the ones involving Humongous Mecha, of course) end up in Super Robot Wars sooner or later.

Several of Sunrise’s original series credit “Hajime Yatate” as their original creator; that’s a collective pseudonym for Sunrise and its animation staff. Yatate is depicted as an actual person in Gundam Sousei, a comedy loosely depicting the making of the original Mobile Suit Gundam. Apparently he’s a loudmouth who wears a cowboy hat everywhere. Who knew?

They also animated eight episodes of Batman: The Animated Series  to mixed results. Eventually they become one of the two animation studios, along with AKOM, to be taken off the series. Nevertheless, Sunrise later created The Big O, a Batman-influenced project with a considerably more positive reception in the West.

Sunrise were also responsible for an aborted attempt to create an Americanized Gundam series, known as Doozy Bots, long before dubbing any of the actual anime. Though nothing was made beyond a rather hilariously misguided pilot.

that they were negotiating with various distributors (Funimation, Viz Media,Sentai Filmworks, Nozomi Entertainment, etc.) to give their shows formerly licensed by Bandai Entertainment “new homes”, after Bandai decided to cease DVD production. So far, Nozomi has announced their distribution

of Mobile Suit Gundam Unicorn. This, along with Discotek Media‘s acquisition of Blue Submarine No. 6 (which was actually a Gonzo title, but was still licensed by Bandai), is a good sign for fans of Mobile Suit Gundam, The Big O, The Vision of Escaflowne, Cowboy Bebop, and various other Bandai-owned shows, as well as for newcomers who want to get into said series without spending an arm and a leg on Bandai’s previous releases.

At Sunrise’s panel at Otakon 2013, these potential license rescues were realized. Sentai Filmworks had picked up The Big Oand S Cryed among many others. Funimation picked up many of the other big-name series like Code Geass, The Vision of Escaflowne, Outlaw Star (and its spiritual successor Angel Links) and Cowboy Bebop, and more (the only release confirmed for Blu-Ray is Cowboy Bebop).