(at the 2015 Game Awards)
“People always ask me how to get into acting in video games. There are two simple steps. First, buy a microphone, and get a lot of practice with it. Second, wait for me and Nolan North to die.”

(on Kanji from Persona 4)
“Kanji is far and away one of the most intriguing characters I’ve ever played. The approach that Atlus wanted to take was a very specific one and we spent the majority of our first session and a good deal of subsequent ones… discussing ‘who kanji was’ rather than just ‘how does this line sound’. They were incredibly patient and gracious, open to ideas and more than anything we had fun with it. There was a delicate balance between the humor and the pathos to Kanji that at times was a very precarious line to walk. We didn’t want to push it too far, for fear of Kanji becoming comic relief, rather than a plot moving element with a stupendous character arc. What has amazed me more than anything is how fans have latched onto Kanji. The way they’ve identified with him has been humbling and incredibly interesting to observe. It further proves my belief that games aren’t just entertainment, but viable venues for social commentary and an interactive experience that challenges our ideas, philosophies and perspectives on the human condition.” 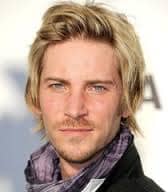 One Piece – The Desert Princess and the Pirates: Adventures in Alabasta (2008)

President of the USA (Male)

Professor Layton and the Miracle Mask (2012)