Michael Tremain Sinterniklaas (born August 13, 1972 in Nice, France) is an American voice actor, actor, ADR director and script writer who has provided voices for a number of English-language versions of Japaneseanime films and television series, as well as video games at Central Park Media, 4Kids Entertainment, Bandai Entertainment, Media Blasters, Viz Media, Funimation and Tripwire Productions. He is also the founder of NYAV Post, A Bi-coastal studio located in New York City and Los Angeles, which dubbed more than 350 different anime titles and recorded several original prelay works. He was born in France, lived in London as a child and moved to the United States when he was 10 years old. Sinterniklaas graduated from High School of the Performing Arts in New York City, and attended college in North Carolina where he did work at both Southwynde and Coastal Carolina Studios.

His most notable roles as a voice actor are Leonardo in Teenage Mutant Ninja Turtles (2003) and Dean Venture (and other small parts) in the Adult Swim cartoon The Venture Bros., Mikey Simon in the Nicktoons seriesKappa Mikey, Orphan in Final Fantasy XIII and as Deady in the 2011 Friday the 13th event of the online MMORPG AdventureQuest Worlds. He also replaced David Moo as Xellos in the English dub of Slayers Revolution and Evolution-R.

Recently, he has started doing voice work and directing work on the West Coast more frequently, and has started directing bi-coastal dubs of anime and prelay productions. 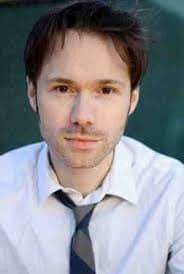