David Wald began voice acting in 2004 on ADV’s “Shadow Skill” as an unnamed soldier who was crushed by a planet, and a long love affair began. After a brief but miraculous recovery from being planet-crushed, David went on to voice roles such as Master Chief in Halo: Legends, Gajeel in Fairy Tail, Berg Katze in Gatchaman: CROWDS, Bulat in Akame Ga Kill, Duke Togo in Golgo 13, Hannes in Attack On Titan, Paulie in One Piece, Mutsumi in Kiss Him, Not Me, and many others. He served as ADR Director for AURA: Koga Maryuin’s Last War and began writing ADR scripts with Sentai’s release of Diabolik Lovers: More Blood.

Before anime staged its hostile-but-welcome takeover of a reasonably respectable life, David spent about 30 years acting on theatrical stages around the country and abroad, where he developed a particular devotion to all things Shakespeare. He attended Elmhurst College in Chicago and then the University of Miami as a jazz & studio music major and spent several years afterward playing keyboards and/or singing in various jazz, rock, and funk bands.

It’s not easy to express how immensely impressed I’ve always been of Mr. David Wald through the years. To me, he never fails to capture the soul of a character and portray it with truth and genuine emotion. However, what makes him stand out, above everything else, can be said in but one word: range. The two roles that will always stick with me as the most memorable (and that display my point about range) are the somber, wise Kiroumaru from the incredible From The New World and the joyously chaotic Berg Katze from the vastly underrated Gatchaman Crowds.

Thank you Mr. Wald for lending your voice and your talents to this industry and, on a personal note, thank you so very much for being a part of our group and speaking with us. I’m sure I speak for everyone when I say we truly appreciate it! 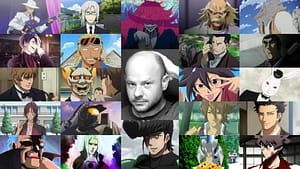 Shimoneta: A Boring World Where the Concept of Dirty Jokes Doesn’t Exist (2016)

Intrigue in the Bakumatsu – Irohanihoheto (2012)