A certain rising star among male VAs (see what I did there) who has played some wonderful…let’s call them “disturbed” characters. However, I find his comedic performances (especially Kenji from D-Frag and You from Ben-To) to be some of the most memorable around. 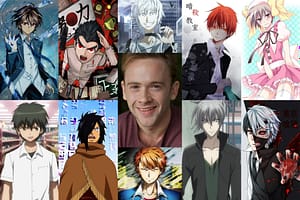 World Break: Aria of Curse for a Holy Swordsman (2015)

President of the Manga Club

A Certain Magical Index: The Miracle of Endymion (2015)