A Review by
Corin Hemphill

Tanaka Yukio, better known by his nickname Koyuki, is a 14-year-old who feels disconnected from life in general. Through the act of saving a mismatched dog, he meets guitarist Minami Ryusuke, and becomes involved in Ryusuke’s new band BECK. Koyuki’s life starts to change as the band struggles toward fame.

Beck is a Coming of Age story where characters discover themselves and each other through their dreams and passion. It’s a slow paced anime where the drama is presented in a subtle manner. When the characters interact and conflict with each other it’s more about what they don’t say then what they do say. With that being said they are easily the best part of the show. Our protagonist Koyuki is easy to relate to because he’s frustrated with how average or uninteresting his life is. Even if you’re not an aspiring musician it’s easy to live vicariously through these characters because he’s following his heart. The same thing goes for several characters. While they do seriously think about their decisions most of the cast’s actions are based on how they feel. That way of making choices can also be seen in how and learn their music.

Speaking of the music that’s the main attraction to BECK. Music is important to the cast and they’re very opinionated on what they like and why they like it which makes for some very interesting dialogue. The show offers a diverse collection of music from Blues to Visual Kei and even a few brief hip-hop songs but mostly focuses on Rock n Roll music. Beck is a rock band so they play high energy music with pulse pounding lyrics especially when Chiba is singing. However, when Koyuki is singing they plow slower, melodic music. That’s why I have to recommend the English dub over the Japaneses dub for this anime. Justin Cook plays Chiba and his vocals are so incredible you’re really convinced that he’s a professional rock star. Greg Ayres who plays Koyuki is also a wonderful singer but the difference between him and the Japanese voice actor Daisuke Namikawa is that Ayres’ voice is much more youthful which leads to far more sincere performances as the 14 year old singer. I must also mention that Brina Palencia delivers wonderful acting and singing performances as Maho.

The animation is pretty sub par for a Studio Madhouse production. There’s a lot of reused footage, awkward off-model character scenes and 3D animation is used to show characters’ hands playing instruments. The art itself if is easy on the eyes except for when it shifts to different art styles. It’s jarring at first but nonetheless very interesting to look at.Overall, Beck Mongolian Chop Squad is a compelling Slice-of-life anime with deep emotional characters and of course, a great soundtrack. 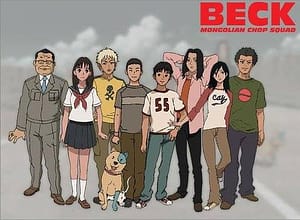